WII FIT REVIEW: Getting in Shape with the Wii Fit

My first experience with a Nintendo Wii saw me breaking a sweat after playing a few rounds of virtual boxing and losing a tennis match. Now people around the world are getting on board one of the first gaming platforms that actually encourages family fitness and health.

Wii Fit is a video game developed by Nintendo for the Wii console and has been dubbed as an example of ‘exercise gaming’. Inspired by sumo wrestlers’ needing to weigh themselves with two scales, Wii Fit uses a unique platform called the Wii Balance Board which senses both weight and shifts in movement and balance. It can also calculate a person’s body mass index (BMI) when provided with their height. It then tracks a user’s “Wii Fitness Age” through a daily body test basing the result on the user’s current age, weight, and athletic ability.

Wii Fit Review: Working out on the Nintendo Wii Fit 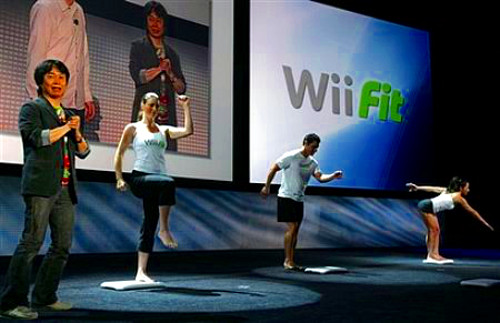 Wii Fit Review: Getting in shape with the Wii Fit (image: nintendo-okie.com)

The unique balance board has taken almost two years to develop, and the Wii Fit game today has about 40 different activities. Training on Wii Fit is divided into four categories: aerobic exercise, muscle workouts, yoga poses, and balance games. The activities provide a core workout, emphasising controlled movements rather than overexertion.

The featured muscle workouts are what you might find yourself doing at the gym. These include press-ups, rowing squats, stretching and the like. The aerobic exercises might find you jogging, hula-hooping, or punching the air with rhythmic boxing.

It gets more fun with the Nintendo balance games, which range from ski jumping to tight-rope walking, and features a game called Penguin Slide – whereby the player has to catch fish whilst balanced on a piece of ice. When you’re done pretending to be the penguin from Surf’s Up you can pose as your favourite Anime character by doing the Half-Moon, Cobra, Warrior, or Palm Tree yoga poses.

Wii Fit also allows a player to keep track of their activities outside of the game, such as gardening, walking, and playing real sports matches, which are then added on to the player’s activity log, but not included in the daily exercise time.

Some of the games allow the player to watch TV while getting instructions or rhythm through the Wii remote speaker. You can even get your own personal virtual trainers to talk you through the different activities and make suggestions for improvement. Furthermore, different people in the same household can use Wii Fit and track their progress separately.

Wii Fit has sold more than 2 million copies since it’s release in Japan at the end of 2007, and was launched in the States (where it is perhaps needed most) on 19 May 2008 with an exclusive release at the Nintendo World Store in New York City.

The Nintendo Wii is also the first video game system ever included in the President’s Challenge – a program of the President’s Council on Physical Fitness and Sports that encourages all Americans to make physical activity a part of their daily lives.

There is little information regarding how Wii Fit has been received in SA, but it has at least reached out shores and is available in stores for around R1000.