IBM has entered into a four year collaboration with ASTRON to research extremely fast, but low-power exascale computer systems (collectively known as DOME) targeted for the Square Kilometer Array (SKA). The goal of the 10 countries involved is to decipher radio waves from deep space to solve the riddles of the universe and the nature of matter.

On March 7, 2012 the Square Kilometre Array South Africa (SKA SA) announced it anticipates working with IBM with the goal of developing a next generation big data analytics platform (titled DOME) with self-tuning and self-learning capabilities to better analyze large volumes of radio astronomy data. SKA SA is building MeerKAT, the largest and most sensitive radio telescope of its kind in the Southern Hemisphere. 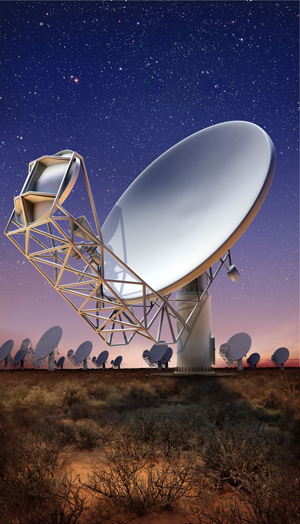 MeerKAT is one of several new radio telescopes being built as precursors to the Square Kilometer Array (SKA), an international project that should reach its full capacity in the early part of the next decade.

On April 2, 2012 ASTRON, The Netherlands Institute for Radio Astronomy, and IBM (NYSE: IBM) announced a five-year collaboration to research extremely fast, but low-power exascale computer systems targeted for the international Square Kilometre Array (SKA). The collaboration is called DOME, named for the protective cover on telescopes and the famous Swiss mountain.

As part of the global effort to solve this unprecedented challenge ASTRON and IBM launched a public private partnership called DOME, to develop a fundamental IT roadmap for the SKA. The collaboration includes a user platform where organizations from around the world can jointly investigate emerging technologies in green computing, nanophotonics and data streaming. Through its SKA South Africa unit, the National Research Foundation is now a user platform partner in DOME.

Scientists from SKA SA will focus on the following research themes:

I will be following the progress of DOME over the next few months and have access to information regarding any new discoveries made by the system. If you would like to keep updated yourself, consider subscribing to Email Updates or the RSS feed up top.