They say that we spend a third of our lives sleeping (presumably in a bed). Well, I reckon that we spend another third of our lives sitting in a chair, especially if you work in an office. Think about it. You get out of bed, sit at the breakfast table, drive seated to work, sit at your desk, drive home again, maybe sit and watch some television, perhaps sit at your computer and do some writing or surf the web and climb back into bed.

Some are more disciplined than that. I had a Swiss-German friend at varsity who couldn’t even sit through a movie because it involved too much sitting.

I find nothing more satisfying than sitting (even better — lying) on a comfortable couch. The funny thing about couches is that it is always the most stuffed, unattractive-looking couch in any house that is everyone’s favourite — the couch that is probably worth less than the amount of loose change that has fallen into it over the years.

My dad has a favourite couch back home, which I’m sure is a source of some embarrassment when visitors arrive. I wouldn’t be surprised if my mother has tried to incinerate it in a freak “coal-leaping-out-the-fire” accident. I’m sure it would go up in flames pretty quickly with the amount of body oil that has seeped into it over the centuries.

This off-white relic has coffee stains, tobacco burns and an imprint of my father’s behind in the center. Yet, when seated in its mould, in front of an early winter’s fire and after some of Mother’s good home cooking, Father is as happy as Larry (however happy he is), usually fast asleep. He probably sleeps more in that couch than in his own bed.

So, if we do spend such a significant amount of our lives in beds and chairs, then why not make them decent ones. I’m always willing to spend a little extra on something that I know I’ll use every day and probably have for a lifetime.

I thought it was high time for me to chair up and buy myself a decent gaming chair — one that I could swivel around in freely and lean back and forth in. It’s a rather simple piece of furniture, although it was one heck of a science putting the thing together.

It came in attachable parts with a set of tools, a spider diagram, some Chinese instructions, and a note of encouragement. I half expected to find a small key, some coded message, a strange map and an enchan­ted ring. Without those one definitely needs a degree to put one of these pieces of technology together.

Although I now swivel contently in my “leather” chair, I still wanted to see what else was available on the market. This is what I found … 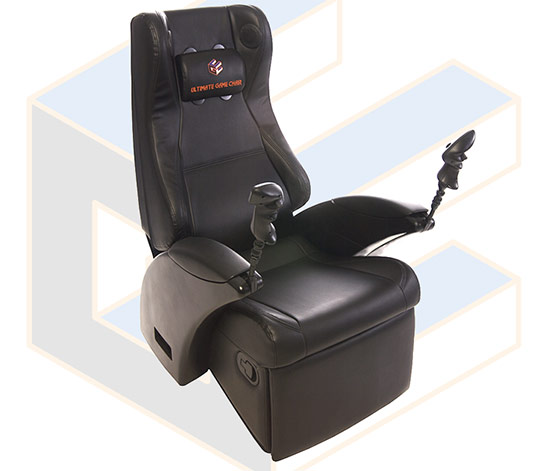 There are a lot of fancy and alien-looking chairs out there — most of which have been designed for home entertainment. The simplest home theatre chairs have speakers mounted on the headrest and are basically REALLY comfortable and pleasant-smelling.

The most common gaming chairs, on the other hand, are designed to enhance the experience of simulators such as Flight Simulator. These have joysticks protruding out the armrests, which I imagine one could use to play a variety of games.

Racing chairs come with an adjustable chassis and have foot pedals and a steering wheel as part of their anatomy. The seats are designed to mimic the feeling of being in a Formula One car, and many even go the extra mile by vibrating as you ‘drive’ over rough roads.

Yet those seats are old school now. You can get a close-enough experience at your local arcade. I was more intrigued by the Ultimate V3 gaming chair. This baby is co­vered in plugs and ports and is compatible with just about everything. To name a few, you can jack it up to your PC, Mac, Xbox, Game Cube, iPod, Playstation, or television. One reviewer had this to say:

“The V3 quite literally rocks your face off! From our experience from it, we were simply stunned. It is like getting a back massage while playing all your favourite games in a comfortable leather chair. It is simply amazing.” — ultimategamechair.com

I imagine that one would never get out of the V3 chair if seated in it. It would be death by comfort. So, I imagine that V3 owners have to be just as disciplined as those who are not fans of the couch.