The Power of Interpretation

HUMOUR: Once upon a time in Italy …

SEVERAL centuries ago, the Pope decreed that all the Jews had to convert to Catholicism or leave Italy. There was a huge outcry from the Jewish community, so the Pope offered a deal.

He’d have a religious debate with the leader of the Jewish community. If the Jews won, they could stay in Italy; if the Pope won, they’d have to convert to Catholicism or leave Italy.

The Jewish people met and picked an aged and wise, learned rabbi to represent them in the debate. However, as the rabbi spoke no Italian, and the Pope spoke no Yiddish, they agreed that it would be a ‘silent’ debate.

On the chosen day the Pope and rabbi sat opposite each other. The Pope raised his hand and showed three fingers. The rabbi looked back and raised one finger. 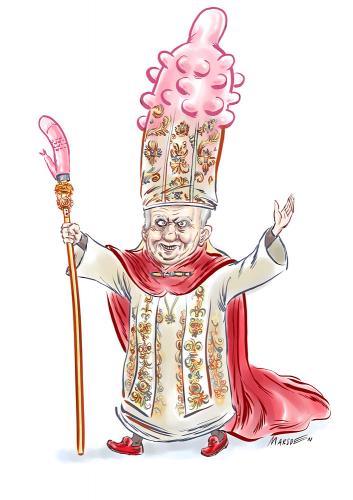 Next, the Pope waved his finger around his head. The rabbi pointed to the ground where he sat.

The Pope brought out a communion wafer and a chalice of wine. The rabbi pulled out an apple.

With that, the Pope stood up and declared himself beaten and said that the rabbi was too clever. The Jews could stay in Italy!

Later the cardinals met with the Pope and asked him what had happened.

The Pope said: “First I held up three fingers to represent the Trinity. He responded by holding up a single finger to remind me there is still only one God common to both our beliefs. Then, I waved my finger around my head to show him that God was all around us. He responded by pointing to the ground to show that God was also right here with us. I pulled out the wine and wafer to show that God absolves us of all our sins. He then pulled out an apple to remind me of the original sin. He bested me at every move and I could not continue.”

Meanwhile, the Jewish community gathered to ask the rabbi how he’d won.

“I haven’t a clue!” said the rabbi. “First, he told me that we had three days to get out of Italy, so I gave him the finger.
Then he tells me that the whole country would be cleared of Jews and I told him that we were staying right here.”
“And then what?” asked a woman.
“Who knows?” said the rabbi. “He took out his lunch so I took out mine.”