The plight of the Black Rhinoceros is, of course, due mostly to the value of its horn and the ferocious poaching that this engenders. However, a contributory factor to the declining rhino population is the animals disorganised mating habits.

It seems that the female rhino only becomes receptive to the male’s attentions every three years or so, while the male only becomes interested in her at the same intervals, a condition known quite appropriately as “Must”. The problem is one of synchronisation, for their amorous inclinations do not always coincide.

In the early Sixties, I was invited, along with a host of journalists and other luminaries, to be present at an attempt by the Rhodesian Game and Tsetse Department to solve this problem of poor timing.

The idea was to capture a male rhino and induce him to deliver up that which could be stored until that day in the distant future when his mate’s fancy turned lightly to thoughts of love.

We departed from the Zambezi Valley in an impressive convoy of trucks and Landrovers, counting in our midst none other than the Director of the game department in person, together with his minions, a veterinary surgeon, an electrician and sundry other technicians, all deemed necessary to make the harvest.

The local game scouts had been sent out to scout the bush for the largest, most virile Rhinoceros they could find. They had done their job to perfection and led us to a beast at least the size of a small granite koppie with a horn on his nose considerably longer than my arm.

The trick was to get this monster into a robust mobile pen which had been constructed to accommodate him. 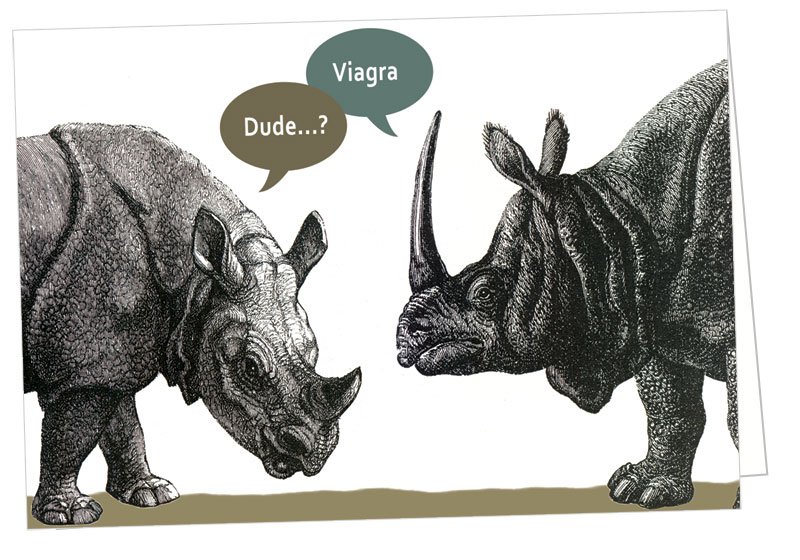 The Pursuit of Happiness

With the Director of the Game Department shouting frantic orders from the safety of the largest truck, the pursuit was on. The tumult and the shouting were apocalyptic. Clouds of dust flew in all directions, trees, and vegetation were destroyed, game scouts scattered like chaff, but finally the Rhinoceros had about a litre of narcotics shot into his rump and his mood became dreamy and benign. 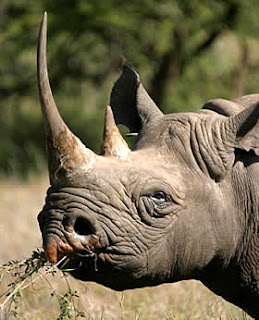 With forty black game guards heaving and shoving, and the Director still shouting orders from the truck, the rhino was wedged into his cage, and stood there with a happy grin on his face.

At this stage, the Director deemed it safe to emerge from the cab of his truck and he came amongst us resplendent in starched and immaculately ironed bush jacket with a colourful silk scarf at this throat. With an imperial gesture, he ordered the portable electric generator to be brought forward and positioned behind the captured animal. This was a machine which was capable of lighting up a small city, and it was equipped with two wheels that made it resemble a Roman chariot.

The Director climbed up on the generator to better address us. We gathered around attentively while he explained what was to happen next …

It seemed that the only way to get what we had come for was to introduce an electrode into the rhino’s rear end, and to deliver a mild electric shock, no more than a few volts, which would be enough to pull his trigger for him.

The Director gave another order and the veterinary surgeon greased something that looked like an acoustic torpedo and which was attached to the generator with sturdy insulated wires. He then went up behind the somnolent beast and thrust it up him to a full arms length, at which the Rhino opened his eyes very wide indeed.

The veterinary and his two black assistants now moved into position with a large bucket and assumed expectant expressions. We, the audience, crowded closer so as not to miss a single detail of the drama. The Director still mounted on the generator trailer, nodded to the electrician who threw the switch and chaos reigned.

In the subsequent departmental enquiry the blame was placed squarely on the shoulders of the electrician. It seems that in the heat of the moment his wits had deserted him and instead of connecting up his apparatus to deliver a gentle 5 volts, he had crossed his wires and the Rhino received a full 500 volts up his rear end.

His reaction was spectacular. Four tons of rhinoceros shot six feet straight up in the air. The cage, made of great timber baulks, exploded into its separate pieces and the rhinoceros now very much awake, took off at a gallop.

We, the audience, were no less sprightly. We took to the trees with alacrity. This was the only occasion on which I have ever been passed by two journalists half way up a Mopane tree.

From the top branches we beheld an amazing sight, for the chariot was still connected to the Rhinoceros per rectum, and the director of the game department was still mounted upon it, very much like Ben Hur, the charioteer.

As they disappeared from view, the rhinoceros was snorting and blowing like a steam locomotive and the Director was clinging to the front rail of his chariot and howling like the north wind which only encouraged the beast to greater speed.

The story has a happy ending for the following day after the director had returned hurriedly to his office in Salisbury, another male Rhinoceros was captured and caged and this time the electrician got his wiring right.

I can still see the Rhinoceros’s expression of surprised gratification as the switch was thrown. You could almost hear him think to himself. “Oh Boy! I didn’t think this was going to happen to me for at least another three years”.