Petition to let the Dalai Lama into SA 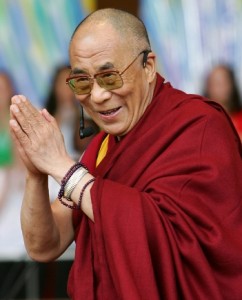 Despite its denial this week, our government appears to have refused the Dalai Lama an entry visa because of fears it may affect the burgeoning trade relationship with China. Archbishop Desmond Tutu has called this act a “total betrayal of our struggle’s history” and along with other Nobel laureates including FW de Klerk has announced he will boycott the World Cup peace conference, which the Dalai Lama was planning to attend before it was postponed.

Generations of South Africans fought long and hard for cultural respect, political equality and democracy in this beloved country. They struggled hand in hand with friends around the world for freedom.

We appeal to you to sign the petition to President Motlanthe reminding him that the New South Africa is a country built on solidarity and calling on him to safeguard our sovereignty from unwanted Chinese government intervention. If enough of us sign, our voices will be heard by the President to reverse his decision and allow the Dalai Lama into the country before the World Cup.

Our government has refused a visa to one of the most revered figures of our times, the Dalai Lama, because of fears it may affect trade with China. Click on the link below to sign the petition to President Motlanthe to reverse his decision and stand up for our proud history of struggle and political equality! Sign here

South Africans have a proud history that must not be bargained away. Global solidarity and international leadership were instrumental in the demise of Apartheid. While economic ties with China have grown, culminating in last year’s undisclosed agreement between our two countries, this opportunity should not come at the expense of human rights or support for one of the world’s leading lights of peace and non-violence.

The Dalai Lama has been campaigning non-violently for autonomy for the Asian nation of Tibet from China for more than 50 years. Denying him a visa will weaken the resolve of other nations to stand up for human rights. It will certainly not serve the interests of South Africans.

Almost a century ago, Mahatma Gandhi was thrown off a train in South Africa because of Apartheid abuse. We must appeal to our government not to mete out similar disrespect to one of the most revered international figures of our times. A Chinese official has admitted that they asked South Africa not to grant the visa citing the danger it would do to their bilateral relationship; the South African government has in turn said “it would not be in the interests of South Africa” to allow the Dalai Lama in.

Let’s together let our President know that abandoning an international human rights struggle for a trade relationship is a rejection of South African history, and unacceptable for the South Africa of today. This recent visa decision comes on the back of the South African government blocking vital UN Security Council decisions which would have encouraged human rights and democracy in Zimbabwe and Burma.

Now China appears to have been successful in telling our government who should and should not enter South African territory. This sets a dangerous precedent and we must appeal to the President of South Africa not to bow down to bullying tactics. As we commemorate the 50 year anniversary of the Dalai Lama being forced to flee his home in Tibet, let’s together call upon the government to issue a visa to enter the land known internationally for its commitment to political freedom and human rights.