The evolution of websites is certainly something exciting to behold. It’s clear that we are moving more towards a visual culture where attention spans are short and web-users are click-happy. Websites today have to be quick to catch and hold a visitor’s attention. What better way to do this by offering something that is flashy, visually-appealing and interactive!

Adobe Flash is a program for producing flash animations for games, websites, applications and cartoons. It generally refers to a certain kind of movement and visual style. These usually consist of some sort of animation that moves around or responds to your mouse cursor.

Flash CS5 is the latest program for creating flash animations and it recently got flashier with the introduction of Papervision 3D.

Papervision 3D is an open source, real-time 3D engine for Flash. It essentially allows anyone to work online in 3D. It has been extensively used in the gaming industry and is becoming increasingly popular for creating interactive 3D websites. A large appeal of Flash is that it is compatible with all web-rich media, social applications and several gaming platforms.

“The Papervision workflow is pretty straightforward. You start by creating a low poly-count model in 3Ds Max, Maya or Blender. You then use the Collada plug-in to create a file that contains information on your 3D model’s set-up, textures and animation. Finally, you can use the Papervision component to import your 3D character into Flash CS3.” — www.computerarts.co.uk

As technical as this process sounds, there is a Papervision 3D library as well as several Flash tutorials available on the web that allow anyone to learn Flash and create their own 3D avatars, environments and animated webtoons. In fact, several cartoons that inhabit the web are made entirely using Flash. Happy Tree Friends and Money Dust instantly spring to mind as prime examples.

Many animation film festivals are now responding to the popularity of Flash animation by adding separate categories in competitions for “web cartoons” or “Internet cartoons.” Flash animation and Papervision 3D is also now taught in schools throughout the UK and is a sought-out talent in the web industry.

But the potential for Flash is staggering. A visit to www.papervision3d.org will reveal an animated scene under the ocean blue. By simply scrolling your mouse, you get a panoramic view of different fish species swimming about, encounter a large shark as it swims by and see a few nervous looking divers in the background. 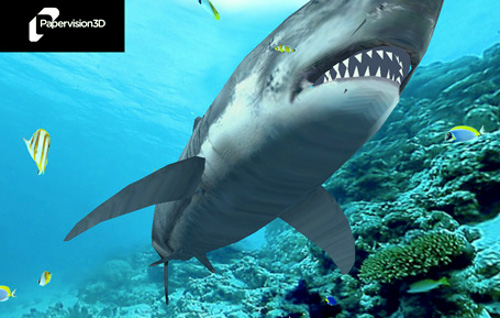 The thought of incorporating Papervision 3D into something like Google Oceans is an exciting one. Currently Google Oceans only offers static images of endangered fish species in different parts of the oceans. But imagine being able to interact with an animated school of marine life by following and clicking on them for more information. This is all possible with Papervision 3D.

A French website www.mtl12.com illustrates the potential for using Flash in the tourism industry. A mouse hover over a link for the Ritz-Carlton Hotel plays a flash video of people walking past the location. A click on the animation takes you into the Hotel itself where you can scroll around and examine the interior to your heart’s content.

Flash seems to be spreading fast. A joint company called Digimi offers free tool kits and tutorials for designing, managing and importing high-quality, flash characters online that can be positioned in virtual worlds, cross-platform games, social networks, mobile applications and professional modeling and animation tools. Papervision 3D in particular is proving to be a fantastic tool for game developers who want to include 3D avatars in their games without the pain of having to build them from scratch.

“As the gaming market continues to grow, so does the need for customization, differentiation and quality,” explains Digimi president, Eyal Gever. “This is exactly what Digimi will offer: the foremost platform for creation supported by the best human figure content library available in the marketplace.”

Digimi.com hosts a library of creative assets for games, virtual worlds and real-time environments. It also provides a platform and set of web services for game developers to be able to generate high-end characters with minimal development effort.

User-generated content is becoming an increasingly important part of consumers’ online gaming experience. The fact that anyone can make use of these Flash tools and contribute, signifies the potential for gamers to essentially create and tailor their own product.