“Thieving blacks”, “kaffirs”, “intruders” and “aliens” are a few of the phrases you might find in South African discourse, or on the web, used to describe the influx of people who have moved into South Africa in desperation to escape an authoritarian government. Although such words are prohibited from use in the mainstream media, they are still deeply entrenched within several South African mind-sets when hearing or reading about the ‘xenophobia crisis’.

Debunking xenophobia: Research and ‘the other’

According to a survey by the South African Migration Programme (conducted in 2000), South Africans display one of the highest levels of xenophobia in the world. Now surely we can be forgiven at some level considering that we are in one of the most racially diverse countries in the world and past policies such as those of Apartheid have helped to instill and reinforce an attitude of categorising and labeling ‘the other’. Surely?

In fact, the process of labeling others who are different has existed since the dawn of humankind and exemplified by the colonial era. The caveman Jones family, who settled in a territory they considered as their own, had to sum others up by appearance and character to ensure that they and their territory (including food & shelter) were not under threat. European colonialists found it necessary to distinguish between human “types” in order to further scientific understanding. Today, invisible yet powerful borders between countries make it easier for us to categorise people, and consequently, guard ourselves against them.

Putting people into boxes (to use a figure of speech) has become an almost natural human process where the socially constructed concept of ‘race’ plays a central role. Extensive research and theories of race are still being devised to try and find a way to work and think around issues of race. However, if there is one thing that I have learnt through my studies, it is that there is no way to think around race. We need to rather, as Ruth Frankenburg suggests, “think through race.”

We have to acknowledge ourselves and others as raced subjects operating within a racist discourse, we need to have images and real sentiments regarding xenophobia in our face, and most importantly we need to be a little understanding and compassionate by imagining what it might be like to be in the shoes of ‘the others’.

The photograph of a burning man, which has been used extensively in the media, has raised some relevant issues. Like the photograph of the falling man taken during 9/11, a very thin and jaggered line is crossed by the way these images are used. It goes beyond simply being a photograph and lands in a thick gravy-pot of human ethics and understanding.

The media have a strict obligation to remain impartial and not to publish content that may be harmful to society in any way. The decision of some papers not to include the Burning Man on the front page of their publications due to its violent imagery is an example of this obligation being implemented. However, it’s not hard to find the photo if it wasn’t in your paper and everyone is talking about it – I’m certain it will soon leak all over the web. In fact you’re likely to find the image published on more blogs and websites than it has been in newspapers.

Debunking xenophobia: The print media vs. the web media

With an increasing number of people (young and old) sourcing their ‘news’ online (where any gate-keeping process is at a minimum) there almost seems to be no point in resisting publishing such a photograph in print. However, “we must think about the children and protect them from such violence” – violence that they could otherwise watch on TV.

Personally I feel that images such as these should be in your face. I regard it as a representation of what some South Africans are doing to other human beings. Granted we need to watch our own backs and protect our jobs, yet there is always room for a little humanity in this world. 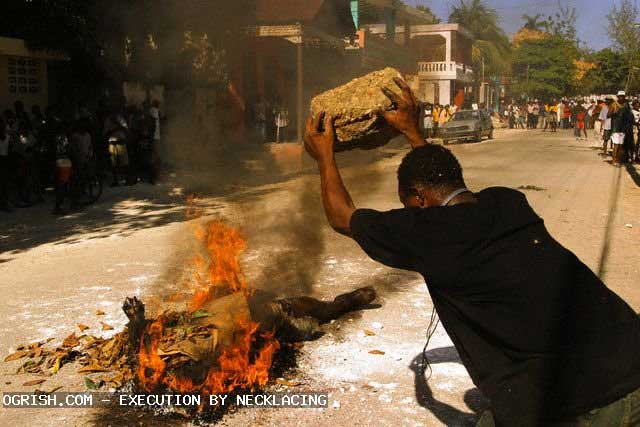 I have been labeled as a white middle-class male who happens to live in South Africa. I have a secure job and have not been directly affected in anyway by the ‘xenophobia crisis.’ You can call me indifferent, or a “privileged white”, but never associate me with South Africans that torture their fellow human being.

As hard as it is to do, we need to start thinking outside the boxes.