Will e-readers end the Age of the Book?

DIGITAL READERS: Digital reading devices could galvanise the market for digital text in the way the Apple iPod did for digital music 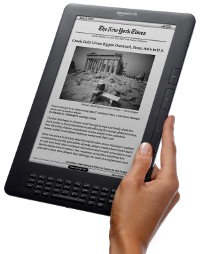 These gadgets are small and light enough to fit into a small suitcase or handbag and eliminate the need to carry around overweight books and over-sized newspapers. Particular texts can be accessed on the Internet to be read on a display screen at the user’s convenience.

Some e-readers have wi-fi, and the choice of devices on which to read e-content ranges from e-readers and PCs to digital watches. It’s a matter of simply downloading the content to whichever device is preferred for reading e-books.

Green enthusiasts may also be swayed by the argument for e-readers, as they are not back-lit, use little energy and could contribute to reducing paper consumption. A Sony spokesperson explained that energy is only used when a page is turned electronically.

Will E-Readers End the Age of the Book?

Sales of electronic readers such as Amazon’s Kindle and Sony’s Reader have been growing fast, prompting smaller companies to introduce their own prototypes and encouraging publishers to step up the digitisation of their books. Publishing giant Penguin announced that they will now be publishing all new titles both as printed books and e-books and will further digitise its backlist.

At the recent Frankfurt Book Fair, Penguin publishers Chief Executive John Makinson said: “They [e-readers] have become mainstream in the sense that they are a genuine consumer product for which there is real appetite, so this is not the province of geeks any longer.”

Up till now e-readers were mainly used by scientists and early adopters, but are ideal for reducing the carry loads of commuters, students and travellers.

Will E-Readers End the Age of the Book? The Global E-Book Market

At present an e-book reader costs anywhere between $300 and $400 (roughly R3 000 and R4 000), which is why book enthusiasts are confident that e-readers will not replace printed text too soon.

However, specialists have already considered cheaper alternatives for South African consumers. They believe mobile phones could prove more popular as a display for reading digital content than e-readers as most people already have cellphones. Furthermore, cellphones provide opportunities for readers to interact.

South African publishers such as Penguin announced at the Book Fair that they are already preparing content for mobile phones. In Japan, short stories especially written for cellphones are already being sent to readers in installments, and Apple’s iPhone are also allowing users to read their novels on a mobile.

So Will E-Readers End the Age of the Book?

Many readers and writers say that the practicality and novelty of e-books will never replace what printed books offer to the senses. Nobel-Prize winning author Orhan Pamuk, who has collected 70 000 tomes says:

“When I look at the standard of today’s technology, then I can’t imagine using an e-reader, no. But one day … when technology manages to create the perfume of books, of old books, then yes, maybe”

Whatever the case may be this is certainly not the day and age to become burdened with poor eyesight! So what do you reckon? Will e-readers end the Age of the Book?