PRAISE THE RAYS: Higher electricity bills power a surge of interest in solar

The sun is possibly the most untapped resource we have. The amount of solar energy produced by our bright, burning star is enough theoretically to power the planet forever; or until it decides to give up on us and fizzle out entirely.

The total solar energy absorbed by Earth’s atmosphere, oceans and land masses is about 3 850 000 Exajoules (EJ) per annum. In layman’s terms, the amount of solar energy reaching the surface of the planet is so vast that in one year it could produce roughly twice as much power as that which could ever be obtained from all of the Earth’s non-renewable resources (coal, oil, natural gas and uranium) combined.

Solar power can be harnessed at different levels around the world depending on geographical location. Basically, the closer a place is to the equator, the more potential­ solar energy is available. Unfortunately, the erection of entire solar power plants is not cheap, but there are ways that we can all do a little better to harness this clean, renewable energy­ source.

I always imagine my future home as a green embodiment of eco-friendliness – a home with a rooftop covered in solar panels. These would be used to heat water, power lights and store excess energy in batteries. Solar geysers are great for water heating and can save a lot on your electricity bill — especially­ if you like taking long, hot baths.

Unfortunately, a solar geyser will set you back about R17 000, but it can cut your monthly electricity bill by up to 40%. More importantly, a solar geyser could cut your carbon emissions by three tons per year. This is according to SolarTech, one of South Africa’s major­ solar businesses that specialises in solar-powered geysers. 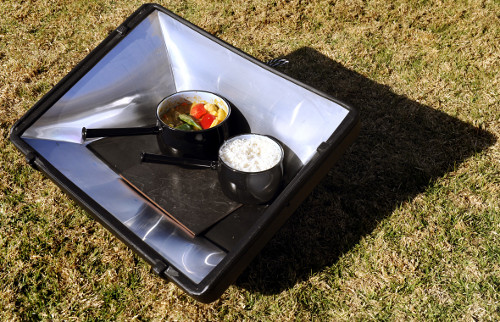 The average household electricity consumption, according to Eskom, is 1100 kWh per month, with an estimated eight percent of consumption ascribed to the stove in your kitchen. The Sun Ray Cooker offers an alternative to using a conventional oven.

If you like the idea of using solar power and are interested in testing the rays, the Sun Ray Cooker is a great affordable start. This solar-powered oven consists of a couple of pots and a reflective box. Simply placing food inside the box and leaving it in the sun for a few hours, slow cooks food to perfection. It is said to be great for stews and can even bake bread.

Natural temperature build-up cooks the food and the cooker can feed up to six people. Generally, a slow solar cooker takes twice the time to cook a meal that a conventional stove does, but the Sun Ray Cooker can save you up to 8% on your electricity bill.

November is the perfect time to make use of such solar-powered devices as we’ll be getting an average of 10 hours of sunlight a day here in sunny South Africa. Even winter sunshine is sufficient for perfect cooking results, says Herman Warren, chief executive of Sun Ray Cooker. The Solar Cooker combo sells for R900.

Prices on solar-powered devices are gradually dropping, yet solar power for individual homes is not nearly as cheap as it should be in this country. But it is certainly a great investment if you wish to go green in 2011.

What should really happen is that solar power be made compulsory for homes of a certain size. Like the power-saving light bulbs we got previously, this Christmas we should get solar panels — freely installed by power-hungry Eskom.