WHEN people consider their future dream home many may think of a four-bedroom, two-bathroom, double-story house with a great view — somewhere in the mountains. I think of a house under the sea — one that has a huge window­ looking out into the ocean and one that is fully connected to the outside world … and which cleans itself.

The home of the future is likely to be far more than just a residence, but an element of lifestyle that will encourage and facilitate learning, inspiration and communication. Furthermore, the surrounding environment would be conducive to creativity and innovation. These are some of the ideas of social and industrial engineer Jacque Fresco. 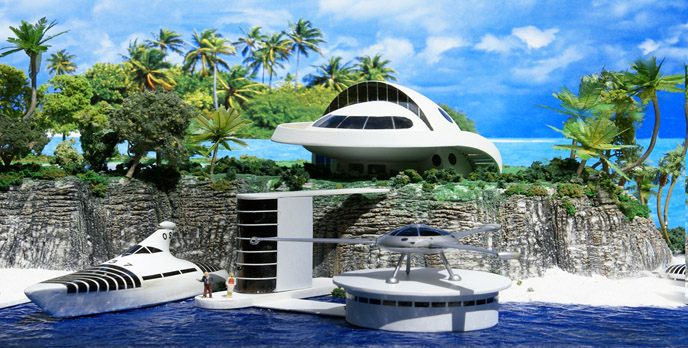 According to William Gazecki – director and narrator of the film Future by Design, “the architecture of future homes will evolve on an entirely different basis from today’s houses. The structural elements­ would be flexible and coherently­ arranged to best serve individual preferences.”

According to the Venus Project website: “These prefabricated, modular homes, embodying a high degree of flexibility inconceivable in times past, could be built any place one might imagine­, amid forests, atop mountains, or on remote islands.”

Gazecki and Fresco propose that houses be prefabricated using a new type of pre-stressed, reinforced concrete with a flexible ceramic external coating. Such material would result in homes that are relatively maintenance free, fireproof, and impervious to bad weather. The construction of future houses’ thin shells could also be mass-produced in a matter of hours. Furthermore, with this type of construction, there would be minimal damage to homes from natural disasters.

Gazecki and Fresco describe the interior of future smart homes as having no source of light in the form of lamps and hanging fixtures. Instead, all the walls would evenly illuminate — either­ the entire inner surface or particular areas. One would also be able to specify the colour and intensity of the illumination.

“Thermopanes would be used to tint out bright sunlight by variable patterns of shading. All these features could be selected by the occupants to supply more than enough of the energy required to operate the entire household,” says Fresco.

“The buildings would be designed as self-contained residences with their own thermal generators and heat concentrators. Photovoltaic arrays would be built into the skin of the building and into the windows themselves,” says Gazecki.

Fresco argues that a considerable amount of water can be saved by designing bathroom installations into one system. A shower, sink and toilet moulded into a single system, for example, would be the simplest type of bathroom that would only use one sixtieth the amount of the water used in today’s more common bathrooms. Waste water from the shower and sink would automatically fill the toilet; so instead of telling people to save water, there would be a system built in.

“Cleanliness and hygiene will become major features of future homes, says Fresco. By building in several sensory devices, homes would be able to detect fire, toxic materials — anything that may threaten the life of a human being.” With these nervous systems built in, future homes would be smart homes.

“When you leave the building the entire building is clean. With a slight increase in air pressure in the building, no dust would be able to come in from outside. If there are any contaminants in the air it would increase the electrostatic charge, which removes contaminants,” Fresco continues.

“For apartment buildings and other large structures, Fresco has devised a cybernated construction system, says Gazecki. The idea is that computer-controlled robots would handle 90% of the movement and placement of prefabricated components. Special advanced materials are to be developed, eliminating waste and minimising the need for manual labour. Guided by satellite, and using a sophisticated form of artificial intelligence, the buildings will actually construct themselves — a technique Fresco has named “self-erecting structures”.

Evolving homes of the future

Fresco believes that one of the most interesting aspects of tomorrow’s civilisation is that people’s homes will change as the people living within them change. As people’s needs and dimensions of knowledge grow, so will the environment in which they live.

“There’s no such thing as a fixed home that a person lives in all their lives … they will choose to live in whatever architectural shape would meet their needs,” says Fresco.

So think again when you consider your dream home and the type of environment you would like to live in. When such ideas finally take off the options could be endless.