Save the Trees with iPaper

I wrote a hand-written letter the other day and found that my hand-writing looked like barbed wire. I realised that it had been a good while since I had used any hand-writing skills due to my increasing reliance on typing everything. It seems obvious to me that the archaic technology of hand-writing is being slowly killed by digital technologies, creating what has been called the paper-digital divide. Yet just when the patriotic hand-writers thought things couldn’t get worse, society unleashed something called “digital paper” or iPaper. 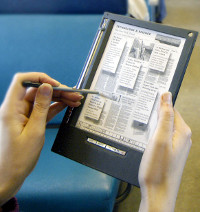 With the use of a digital pen, iPaper allows hand-written notes or sketches to be digitally captured and stored. The ‘ink’ absorbs light transmitted from the digital pen, which contains a receiver that interprets the pattern of light reflected from the paper. This is creating new possibilities for publishing new forms of interactive-based documents without having to worry about your pen running out of ink!

What seems more intriguing is that iPaper allows users to develop a wide range of interactive paper-based interfaces and applications without having to do any programming. Furthermore, active areas on the paper can be linked to and from a wide range of physical and digital media including web pages, images, video, flash animations, databases and RFID tags as well as application programs.

Some of the more interesting and useful iPaper applications that have been developed thus far include:

So for those of us who are still great appreciators of the art of hand-writing there’s still hope for maintaining our craft whilst keeping abreast of the latest in digital technologies.

Related post: Will e-readers end the Age of the Book?