THERE is an ever-increasing number of mobile devices (phones and PDAs) being launched on the South African market that include global positioning system (GPS) receivers as a standard feature.

However, these devices rarely come bundled with accurate, high-quality GPS and mapping software – a deficiency that often makes the GPS feature an underutilised mobile option.

A GPS in your pocket
Garmin Mobile XT Version 5 is a new product Garmin are launching in 2009 specifically for cellphones with GPS receivers.

The product is installed on an SD card and transforms GPS-enabled mobile phones or PDAs into full-featured navigation devices, with all the functionality of conventional GPS devices (such as turn-by-turn voice prompts). 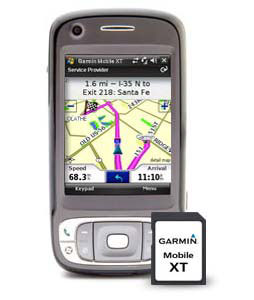 This is according to Andrew McHenry, head of mobile and content for Avnic Trading (the official South African distributor of Garmin and Garmap), who says that for very little cost users can take full advantage of having a “go-anywhere” navigation device in their pockets, which is as convenient and beneficial to use as it is easy to set up.

To enable South Africans to get the most out of their GPS-enabled devices, Avnic Trading has announced the retail availability of Garmin Mobile XT version 5 – the company’s full navigation application, which utilises the very latest Garmap Africa Series 2008 mapping data.

Garmin Mobile XT: Points of interest
Garmap Africa Series 2008 Second Edition now includes over 750 000km of routable map data for 1 700 cities, towns and villages, as well as 55 nature reserves, in nine countries. To date, the map set also includes over 190 000 points of interest (POIs) and the list is growing on a regular basis.

“Garmin Mobile XT gives users the ability to check weather forecasts for their destinations, access flight details for many major airlines, and call a point of interest (such as a restaurant or coffee shop) using the phone feature.”

Garmin Mobile XT: Social / community feature
“There are a number of community-focused features in Garmin Mobile XT that aim to add even more benefit to having a GPS in your pocket,” says McHenry.

Users can send a location message to another mobile phone – detailing their exact location in GPS coordinates. If the receiving mobile phone also has Mobile XT installed, the message translates into a destination point and allows the receiver to easily and quickly navigate to that point.

Garmin Mobile XT: Safety feature
Being able to find someone also plays a huge role in safety and security. Mobile XT includes a “panic button”, which automatically fires off an urgent location message to three emergency contacts whenever the # key is depressed for more than 3 seconds in certain Samsung and Nokia handsets.

Garmin Mobile XT: Panoramio
For tourists and pedestrians in South Africa, Garmin Mobile XT also includes a useful social feature called “Panoramio” – a tool that allows consumers to access user-generated content that has been uploaded to the web.

“Utilising Panoramio, users can download a list of photos that were taken by other users who had visited the same area before and uploaded these geo-tagged photos to the Panoramio website,” says McHenry.

“In Garmin Mobile XT, users see a list of photos, a short description of the photo and the distance to the place where the photo was taken. Users then simply select the attraction that they want to see and Garmin Mobile XT shows them how to get there.”

“This makes it easy to navigate cities and tourist destinations, using landmarks and tourist attractions without having to know the exact address,” McHenry adds. “It’s a great new way of discovering attractions in foreign cities, or maybe even in your own backyard.”

From point A to point Z
“There is so much more to the GPS feature on mobile devices than the glorified map book,” McHenry says. ”It’s not just about navigating from point A to point B anymore. There’s so much to discover out there, and you may just be carrying the very tool in your pocket to help you find it.”

As someone who is somewhat renowned for getting lost in his own backyard, I’m writing to Santa and asking for one of these babies as a late Christmas present!

– issued on behalf of Garmin and Tribeca Public Relations