A Whiff of the Modern Cellphone

CELLULAR TECHNOLOGY: A Whiff of the Modern Cellphone

The cellphone has become one of the most widely used digital technologies in everyday life. However, current cellular innovations appear to be both exciting and potentially dangerous at the same time. 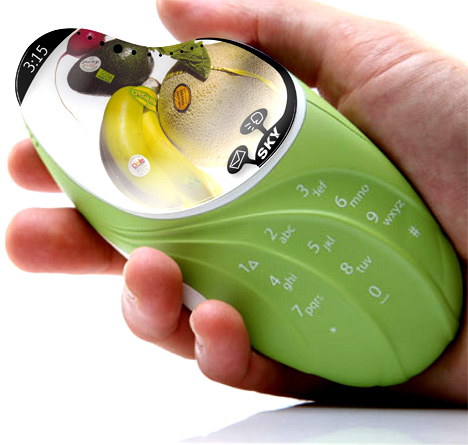 The Health Concept Phone (pictured) is a modern cellphone equipped with eNose technology, which effectively allows it to electronically “smell” what you eat and keep track of your food intake. It is able to ‘recognise’ food (and other things) by its unique chemical signature. Recommended for people who have a habit of eating with their eyes closed. Similar cellphones have the ability to emit a whiff of your significant other’s scent every time he or she calls.

New cellular features (and what one can actually do with a modern cellphone) are taking the lead in incorporating the latest and greatest technical innovations. Interestingly, cellphones equipped with such state-of-the-art technology are becoming increasingly popular in countries such as South Africa as opposed to those who one might refer to as the ‘digital elite’.

The most striking (and perhaps most frightening) ideas are to create cellphones that come closer to human nature than we might like to believe. Electronic giant Samsung is planning to create a cellphone that has “artificial chromosomes” built within, and will be able to ‘think’, ‘feel’, ‘evolve’ and even ‘reproduce’. The concept seems close to the earlier invention of the Tamagotchi – a digital creature that adjusts its ‘life’ according to the personality and actions of its owner.

Other companies have already customised the cellphone for social networking sites such as MySpace and Facebook, which they say “effectively allows you to carry your social life in your pocket”. No human contact needed.

The notion that we are living in an expanding visual and digital culture is becoming more apparent by the development of such technologies. Perhaps the most exciting modern cellphone feature that manufacturers are focusing on at the moment is video. Several companies are talking about making it possible for millions of people to simultaneously stream live video and TV channels via their phones. Music fans may receive the most recent music videos by their favourite bands instantaneously — a concept being coined as ultrareality.

As exciting as these developments sound, the luddites (technology pessimists) will tell us that this is not all cream and cake. And no, these are not all hippies that protest against technology, but clued-up intellectuals who know what they are talking about. An article published in the Washington Times describes how digital experts in the Middle East are making use of cellphones to trigger off road-side bombs. James Bond films also illustrate how the modern cellphone is, rather accurately, used in the spy industry for corruption purposes.

The pace that such developments are taking do have the danger of blinding one to their negative possibilities. However, the idea of getting a whiff of your significant other’s scent through your cellphone every time he or she calls is both crazy and exciting.