I was thrilled to hear that the world’s first fully solar powered aircraft, Solar Impulse, successfully completed its first international flight last week. The Swiss solar powered aircraft flew for a full 13 hours from Payerne to Brussels without using a single drop of fuel. Granted that the aircraft is slow moving (with a top speed of around 50 km/h), Solar Impulse represents an astonishing feat of engineering and shows just how much can be achieved with renewable technology. Gizmag.com suggests that we may even look back on this period as a “Wright brothers moment” in the history of aviation.

According to Gizmag: “A rough calculation tells us that a Boeing 747 would have used around 7 570 litres of fuel to make the same trip. Of course it’s not much of a comparison when you consider that a commercial airliner can carry hundreds of people, but one can’t help but think that the seeds of a new era are being sewn. Solar Impulse is powered by 4×10 horsepower electric engines, the Wright brothers had 12 horsepower at their disposal when they flew at Kitty Hawk in 1903.”

We should not neglect these significant moments in history. It brings to mind the ecological work done by a Frenchman who died in 1981. My attention was drawn to this great innovator by a contact living in Russia who happened across a video made by some permaculture students living in New Zealand. Ah, the joys of Facebook!

Jean Pain (1930-1981) was a self-taught organic gardener, forester, and biotechnologist who developed a compost-based bio-energy system that produced 100% of his energy needs. It can be argued that he was a genius ahead of his time, as three decades later we continue to develop efficient bio-energy systems with new technologies that are as efficient. Pain’s work is certainly worth celebrating, so I wish to offer this as a tribute to the great man. 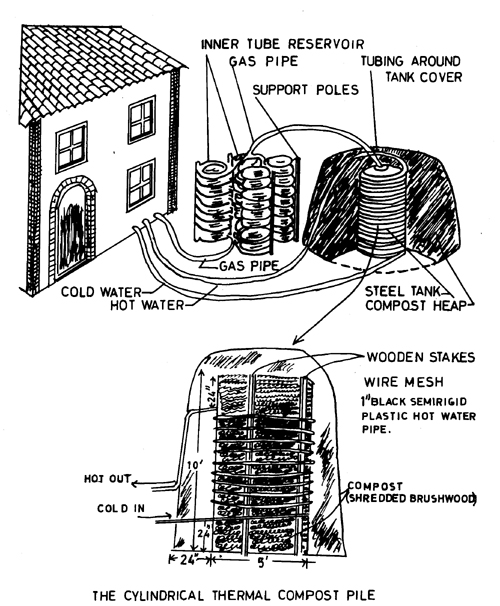 “This power plant supplies all a rural household’s energy needs. It is a mound of tiny brushwood pieces (three metres high and six across). This compost mound is made of tree limbs and pulverized underbrush. The 50 ton compost is in a steel tank with a capacity of four cubic metres. It is three-fourths full of the same compost, which has first been steeped in water for two months. The tank is hemetically sealed, but is connected by a tubing of 24 truck tyre inner tubes, banked near by a reservoir for the methane gas produced as the compost ferments” — www.daenvis.org

The method of creating usable energy from composting materials has come to be known as the Jean Pain Method. By distilling methane, Pain was able to run an electricity generator, fuel his truck and power all his electric appliances. Pain lived on a 241-hectare timber farm, so had free access to the raw materials needed to produce energy.

Pain essentially constructed a compost power plant (of his own design) using brushwood and pulverized underbrush, which supplied 100% of his and his wife’s household energy needs. Pain estimated that 10 kilos of brushwood would supply the gas equivalent of a liter of petrol.

Pain spent considerable attention developing prototypes of machines required to macerate small tree trunks and limbs; one of these, a tractor-driven model, was awarded fourth prize in the 1978 Grenoble Agricultural Fair, according to Wikipedia.

When compost decomposes or ferments it produces heat. By burying 200 metres of pipe within a large compost mound, Pain was able to heat four litres of water a minute to 60 degrees Celsius. A sizeable compost heap continues to ferment for 18 months, after which the installation is dismantled, the humus is used to mulch and fertilise soils, and a new compost system is erected.

Jean Pain’s methane generator took 90 days to produce 500 cubic metres of gas. However, this is enough to power two ovens and three burner stoves for a full year. Pain’s methane-fueled combustion also powered a generator which produced 100 watt-hours of electricity every hour. Pain was also able to store this current in an accumulative battery, which could be used to power lights.

The Jean Pain Method is an amazingly simple and incredibly inexpensive system of extracting both energy and fertiliser from plant life. Pain worked within the balance of nature to become truly self sufficient. May history honour his memory.