Protecting Ourselves from the Global Warming

“We must protect ourselves from the Global Warming! Top scientists in Colorado believe that Global Warming will strike two days before the day after tomorrow!” – South Park

I was walking past the fruit and vegetable section in a supermarket one winter’s day when I felt a powerful gush of warm air seduce my face. The seducer was a household fan that had a heated coil in its centre which heated the air to a remarkable extent.

I soon learned that these new heating devices are very considerate on their energy usage and weren’t badly priced either. However, our coldest winter yet is thawing to a close, and it won’t be long before we go to lengths to keep cool.

Cooling off in the Global Warming

Contemporary air-conditioning systems are not only heavy energy consumers but also have an utter disregard for the ozone layer. At full volume a household air-con farts out enough greenhouse gases to chock a small elephant.

Thank the pope ScienceDaily have recently reported that scientists from Madrid have produced a solar-powered air-conditioner that is far more environmentally friendly than previous cooling systems. It is said to use a reduced amount of greenhouse gases and does not harm the ozone layer in any way. 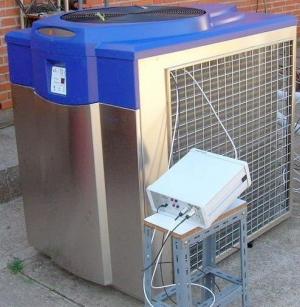 Known as an “absorption chiller” the device makes use of solar and residual heat as an energy source. For the science people, the technology combines the use of lithium bromide solution with a reduction in the use of water, which supposedly damages the ozone layer and contributes towards the greenhouse effect.

More technically speaking, the absorption chiller mechanism is capable of producing cold water at temperatures ranging from 7º C to 18º C when the sweating thermometer on the wall displays temperatures between 33º C and 43º C.

A Look to the Future

The new cooling system seems to have arrived at a good time too. Last year 191 countries were involved in a signed agreement to avoid the use of ozone depleting substances as well as set a 25% consumption limit by 2010 (as compared to 1996).

By 2020 it will become law for all developed countries to replace all HCFC refrigerants, such as those used in air-conditioners, with green substitutes. No mention of developing countries however. I guess the ‘First World’ is quite content to continue selling the cheaper, more lethal air-conditioners to the ‘Third World’ forgetting that we all share the air that we breathe…