GREEN TECH: Green Gadgets That Could Help Save the Planet

With the possibility of yet another energy crisis looming, coupled with the current financial crisis & soaring fuel prices, gadget makers got a chance to show off their green credentials at the Stuff Live! technology show held in London. Amid the usual array of power-hungry televisions, stereos & computers were a handful of companies promoting hi-tech, green gadgets designed to cut energy consumption and help save the planet.

London-based firm DIY Kyoto has come up with The Wattson – a wireless device that lets families monitor exactly how much power they are using at home. It measures electricity consumption and displays the amount of power and how much it costs on a sleek portable box with a digital screen. The £100 device glows red when households use more power than normal or blue when they are being energy efficient. Gadgets couldn’t get more green than that! Except maybe blue and red too…

“The whole idea is to save money and to save the environment, and what’s great is that you find people try to get the reading down as low as possible” – Jason Goldman of DIY Kyoto.

British gadget website www.firebox.com displayed a Chinese-built electric scooter that it has converted for sale on the British market. Called the Ego Street Scoota, it has a 30 to 40 mile range and a top speed of 30 mph. It costs eight pence to charge the bike using the mains electricity supply.

Parked next to it was a more powerful scooter from U.S. firm Vectrix. Its Maxi-Scooter has a top speed of 62mph and a range of 68 miles at 25mph. Its latest model has a built-in music player and a system that sends music wirelessly to your helmet. 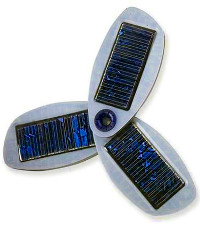 While nearly all gadgets rely on electricity or batteries, a range of portable chargers from U.S. company Solio, that use solar power, were on display. The devices can convert one hour of sunshine into an hour of playback on an iPod or 25 minutes of talk time on a mobile. The gadget has three blades which fan out to catch sunlight which it then stores in an internal battery for up to a year. 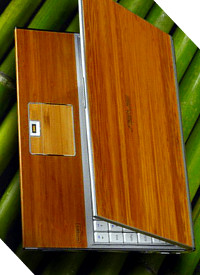 Wearing its heart on its sleeve, one energy-efficient laptop came with a shell made of bamboo instead of the usual plastic or metal in an attempt to reinforce its eco-friendly aspirations.

Taiwanese computer maker Asustek said it used bamboo because it is strong, grows back quickly and is biodegradable.

Advised to keep away from pandas!