Good to be Google 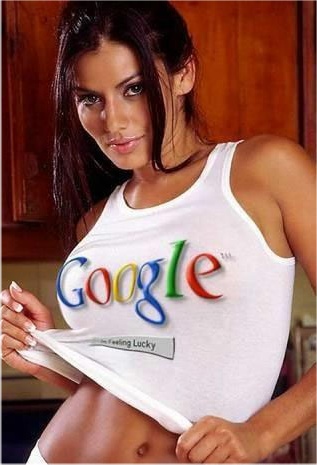 IT must be good to be Google. Bringing joy and information to millions around the world every day, while earning billions in the process must feel really fulfilling. Getting the opportunity to work for Google is the dream job of many Internet junkies.

I’ve always imagined that the job of creating customised designs of the Google logo is one of the most coveted in the company. Imagine being asked what you do for a living and being able to respond with, “oh I’m just doing a little graphic design work at the moment creating logos. Have you ever heard of Google?” You’d have Internet geeks polishing your shoes and bringing you freshly-squeezed orange juice.

However, it seems that this is not the case. There is no single Google King-God who is the master behind every customised logo. That is why it is usually just the standard blue, red, yellow and green logo.

But, every little now and then we are pleasantly greeted by a customised logo — creatively crafted to commemorate a significant event in history or to celebrate an important person’s birthday. I’ve been excited to see these designs appearing more often than usual, which is largely due to a new annual Doodle 4 Google competition, and 2009 has seen some of the best designs yet.

If Google is not currently set as your homepage, do that now. Open up your web-browser (e.g. Internet Explorer) and click on “tools” then “Internet options” (on the top-right of the screen). Type in the following in the white home page box: http://www.google.co.za/ and click “apply.” I’ll wait …

It’s really worth doing the above for you may be missing out on these visually-pleasing bits of knowledge. When a customised logo appears hover your mouse over it to get a description of what it’s all about. If intrigued enough, click on the logo to be presented with a wealth of information on the event.

So, without any further ado I present you with some of the top logos and best designs for 2009.

Google displayed this logo on July 22, 2009 on Google China and Google India homepages to commemorate the longest solar eclipse in both countries for at least a century. The solar eclipse lasted as long as six minutes and 39 seconds in some places. This eclipse is also considered as one of the most watched eclipses of all time because of the path it takes, it is clearly visible from some of the most densely populated places on earth.

400 years ago (on August 25, 1609), the Italian astronomer and philosopher Galileo Galilei showed Venetian merchants his new creation — the telescope. The instrument was to bring him both scientific immortality and, more immediately, a whole lot of trouble. Galileo’s discoveries were, perhaps predictably, not best welcomed by the Catholic Church, and he spent the final decade of his life under house arrest. 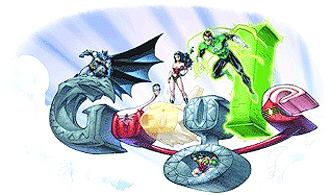 Google pays tribute to comics by displaying this logo (on July 23, 2009) with the launch of a new super Google logo by DC artists Jim Lee, Scott Williams and Alex Sinclair. The logo marked the start of Comic-Con festivities.

On May 17, 2009, Google celebrated the birth anniversary of Igor Fyodorovich Stravinsky by displaying this logo on all its homepages. Igor Fyodorovich Stravinsky (June 17, 1882 to April 6, 1971) was a Russian composer, pianist, and conductor, who was considered by many to be one of the most important and influential composers of 20th century music. He was a quintessentially cosmopolitan Russian who was named by Time magazine as one of the 100 most influential people of the century. In addition to the recognition he received for his compositions, he also achieved fame as a pianist and conductor<!–, often at the premieres of his works.

KIDS DOODLE 4 GOOGLE: “What I wish for the World”

EVERY once in a while, Google passes the creative baton into the hands of interested Internet users to design the next Google logo. Creative minds are given the chance to have their logo displayed to millions on Google’s home-pages for a day, as part of a competition appropriately called “Doodle 4 Google.”

The 2009 Doodle 4 Google competition saw school kids from all over U.S. submitting designs for the Google logo based on the theme “What I Wish For The World”. Twenty-eight thousand designs were received this year. Here are the top four logos with a little snippet from each of the young designers: 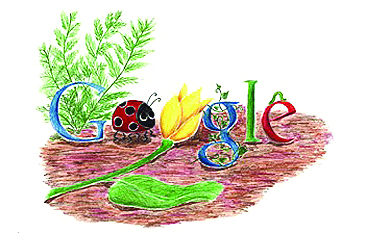 “What I wish for the world is that people would slow down to see all the beauties of life of the Earth around us. So many people rush on with their lives never stopping to say hello to a lady bug who’s watching the world spin by.” – Blakely Linz (aged 13) 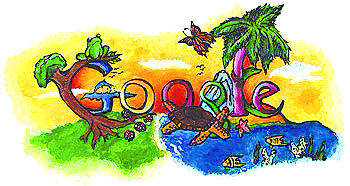 “My doodle, A New Beginning, expresses my wish that in the current crisis, discoveries will be made. That in these discoveries solutions will be found to help the Earth prosper once more. That those solutions will help the world get back on its feet and create a better place for everyone.” – Christin Engelberth (13) 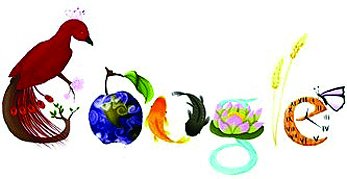 “The world will be reborn in peace, harmony and prosperity. Pheonix is reborn from ashes; blossoms and lotus symbolise peace. Earth is a prosperous like an apple. Kois symbolise harmony. Wheat is a prosperous crop. The clock represents time for the world to change. The butterfly carries it on its journey.” – Emerald Lu (13) 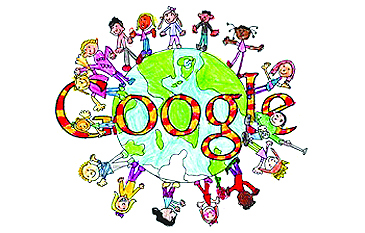 “My wish for the world is that everyone would get along and treat one another in a nice and loving way. We could all be friends!” – Miriam Elizabeth Lowery (5)

On July 10, 2009 the Google logo was transformed into a Tesla Coil to celebrate the birthday of Nikola Tesla. Tesla (July 10 1856 to January 7, 1943) was an inventor and a mechanical and electrical engineer. Tesla is often described as an important scientist and inventor of the modern age, a man who “shed light over the face of Earth”. He is best known for many revolutionary contributions in the field of electricity and magnetism in the late 19th and early 20th centuries. Tesla’s patents and theoretical work formed the basis of modern alternating current (AC) electric power systems, including the polyphase power distribution systems and the AC motor, with which he helped usher in the Second Industrial Revolution.

Google celebrates the anniversary of first manned spacecraft (The Eagle – Apollo 11), which landed on the moon on July 20 in 1969.

Google celebrates the birth anniversary of Mary Cassatt (May 22, 1844 to June 14, 1926). Mary Cassatt was an American painter and printmaker. She lived much of her adult life in France, where she befriended Edgar Degas and later exhibited among the Impressionists. Cassatt often created images of the social and private lives of women, with particular emphasis on the intimate bonds between mothers and children.

The Perseids are a prolific meteor shower associated with the comet Swift-Tuttle. Meteor showers occur when the Earth moves through a meteor stream. The stream in this case is called the “Perseid cloud” and it stretches along the orbit of the Comet Swift-Tuttle. The cloud consists of particles ejected by the comet as it passes by the Sun. Most of the dust in the cloud today is approximately 1 000 years old. The shower is visible from mid-July each year with the greatest activity between August 8 and 14, peaking on August 12. During the peak, the rate of meteors reaches 60 or more per hour. They can be seen all across the sky, but because of the path of Swift-Tuttle’s orbit, Perseids are primarily visible in the northern hemisphere.