MEMORY TECHNIQUE: A step by step guide for creating a memory palace

If there is one person whom I could meet in this world, it would be Derren Brown. The BBC recently broadcast a one-hour special to celebrate 10 years of the psychological illusionist’s work. I personally endeavour to watch everything ever made by Derren Brown and I’m currently­ immersed in his latest book Confessions of a Conjuror. Great read.

Although Derren Brown is something of a trickster — making use of suggestion and misdirection to manipulate people and accurately predict their behaviour — his skills are something to behold. His newer TV shows also seem to be about helping people in areas such as self-improvement and increasing self-confidence.

Thousands of ‘ordinary’ people apply to be on his shows where he teaches participants some of his psychological techniques. In a recent Trick or Treat episode, an applicant in his mid-40s claims to have a very bad memory (as many people of that age might advocate).

One fantastically simple memory technique that is mentioned here is that of the memory palace. This creative approach is not only simple, but it is highly effective in committing long lists of information to memory that can then be recalled at will. It has been used since ancient Rome and goes something like this. 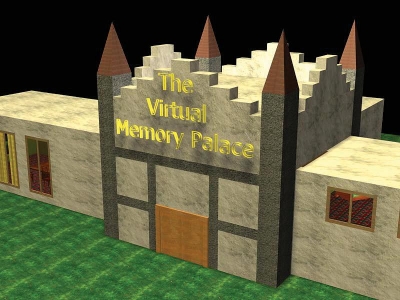 The Memory Palace Technique is based on the fact that we’re extremely good at remembering places we know (image: web.science.mq.edu.au)

The whole memory palace technique is based on the fact that we’re extremely good at remembering places we know. So, the first step is to create a memory palace of your choosing in your mind’s eye. A memory palace is essentially a physical location that you are very familiar­ with — such as your home or route to work. So long as you can clearly visualise each room or landmark within your memory palace, it will serve you well.

The second step is to trace a clearly defined route through your memory palace and visualise particular objects along the way. If you are considering your home for example, your route may start with your front door. You may enter into a hallway and notice a mirror hanging on the wall. Start with one object per room and follow an easy path (such as from left to right) until you are back at your starting point.

Practice following this route in your memory palace — making an effort to remember each specific object in order. This shouldn’t be hard to do if you choose a place deeply embedded within your mind; perhaps the house you grew up in. Each object is generally known as a “memory peg”.

Step 3: Peg it to memory

Now think of something that you’d like to remember, such as a shopping list or your agenda for the week ahead. Place items in a particular order and integrate each with a memory peg (object) within your memory palace. It helps to conceptualise objects as being bizarre or perhaps cartoon-like at this stage. Memory does, after all, perform best when operating in a strong, visual way.

For example: your week could start by going to the post office. If you have chosen your home as a memory palace, visualise a letter box spewing out envelopes. Perhaps your child is playing a school cricket match on Tuesday. Visualise a school cricket match happening inside the mirror in the hallway. Animate­ things as best you can and they’ll be sure to stick in your head. You could even add smells and sounds to things to remember.

The memory palace has proven to be a powerful memory technique that anyone­ can use to awaken the memory they already have. Your imagination really is the limit. Also, remember that you can have more than one memory palace for dealing with different kinds of information. There is also always the option of upgrading your palaces once you’ve got the hang of it.