TECHNO fundis have been salivating over the idea of 3DTV since a massive 3D exhibit went on display at the Consumer Electronics Show (CES) in Vegas towards the end of last year. However, a lot of tech writers have not been overly impressed with what they’ve seen and are suggesting that anticipation over 3DTV may be met with disappointment. As it stands, techies argue that it will be little more than a niche curiosity in home entertainment this year.

It is clear that 3D is the new direction that all forms of digital entertainment are taking. Experts are even suggesting that digital photography will become 3D by the year 2060, although with the pace that technology is moving forward, such predictions often seem to transpire decades before their scheduled birth date. So we may see things such as 3D photography emerge sooner rather than later.

The pace that digital tech is advancing has always posed a problem for consumers. One has constantly to upgrade pricey equipment if you want to enjoy the latest digitalised offerings. And just before South African consumers could rush out and buy HD-ready TVs, the digital giants unleash the next generation of television sets – namely 3D-ready TVs. However, it may be wise to hold out a bit before going 3D.

3DTV CONTENT
The major concern regarding 3DTV in the home environment is simply lack of content. There have been an increasing number of 3D films lately – Bolt, Up and Avatar, to name a few — and there is certainly a market for 3D film, but at present the costs of offering such content via cable and satellite channels just isn’t feasible.

ESPN, of course, has announced a special 3D channel due to go live when the Fifa Soccer World Cup kicks off on June 11, and British satellite provider B Sky B plans to launch a 3D channel later this year, but as far as movies and scheduled programming goes, nonsports fans may feel a little disappointed. ESPN is promising to air a minimum of 85 live sporting events during its first year, but this may only interest fans of baseball, basketball and other predominantly American sports.

Discovery, together with Sony and IMax, also announced that they will launch what they claim will be the first 24/7 dedicated 3D television network. However, this will only be available in the United States come 2011. 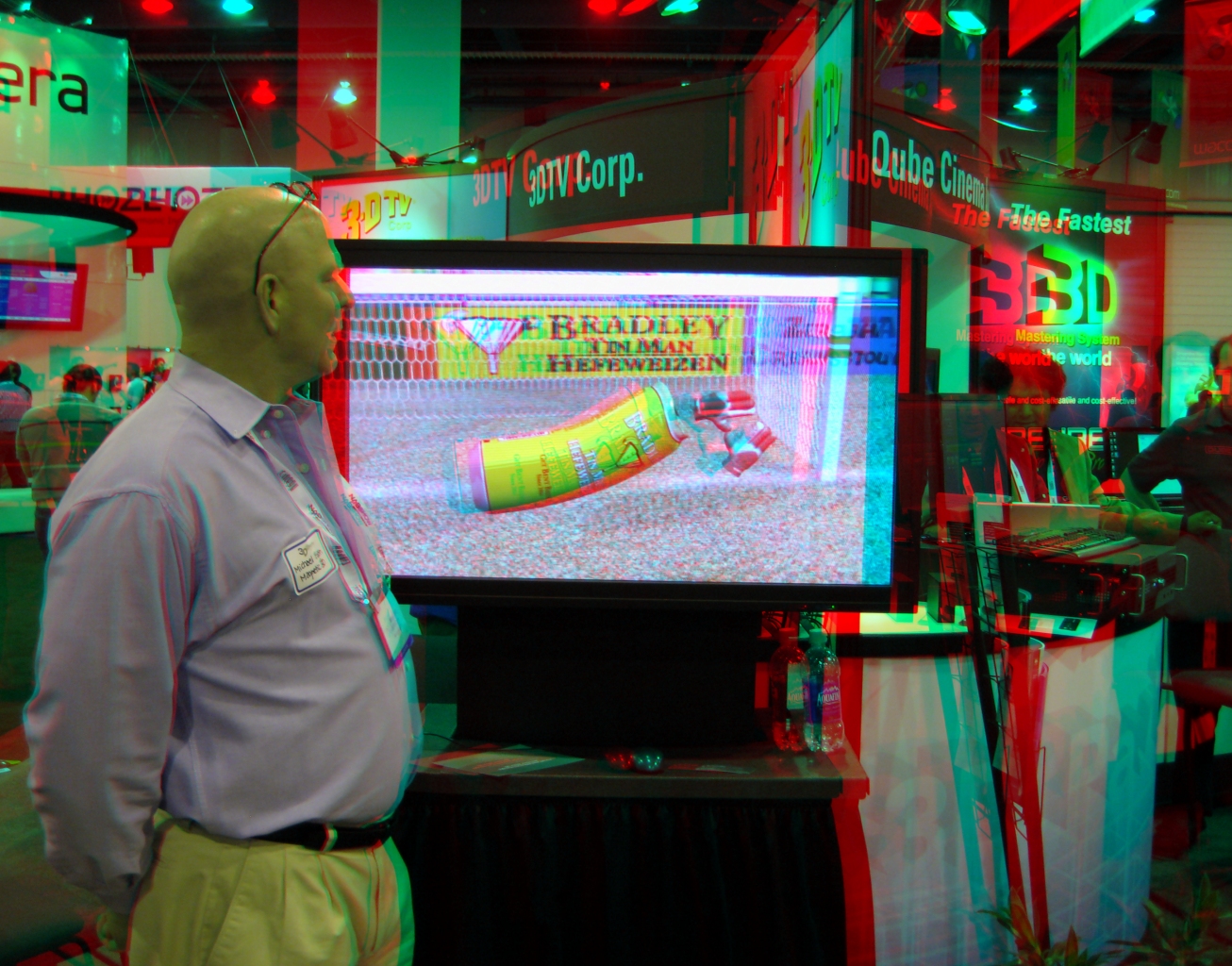 Autostereoscopic TV (in 3D). The above picture can be seen in 3D using 3D glasses (Image: Flickr.com)

3DTV DISPLAYS
Another concern for 3DTV manufactures is that the idea of having to wear “silly-looking” displays (3D glasses) in order to watch something in 3D will not appeal to most people — especially to a crowd of sports fans gathered in someone’s living room. It may be fine for the movie-theatre experience — a seated event — they suggest, but perhaps not so great when people are going in and out between bathroom breaks and the kitchen.

This may seem petty, but I recently bought a pair of 3D shades for my PC and can understand the concern. One’s eyes do have to undergo a fair amount of adjusting, and once the glasses are removed, your 3D-enhanced optical nerves are basically back to square one. I once took a bathroom break after a couple of hours of 3D gaming and discovered a room made of blurry red and blue tiles.

3D displays are, however, varied and will no doubt advance at more or less the same pace as 3DTVs. It may even get to a point where we don’t have to attach anything to our heads in order to get a good view. Such sets are currently available but offer a much lower resolution than that of the 3D Mac Daddies. Everyone would also have to sit right in front of the screen at a certain distance to see a clear picture, possibly on one another’s laps.

3DTV FUTURE
It’s clear that sport will dominate the entry of 3DTV, but directors and producers of all genres of televised entertainment will also need to learn more about the “language” of 3D filming to really take advantage of it. We may see a whole new demand for 3D-ready TV/film students soon too.

My bet is that it isn’t worth getting a 3D-ready TV, at least not until they’ve fine-tuned it a bit. Rather invest your money in a large HDTV and a good surround- sound system. After all, it really is size that counts.

Related post: The reality of the virtual
Videos: 3DTV at the Consumer Electronics Show