In the beginning, there was the mighty Groupon, which gathered hundreds of followers worldwide. Now, a new era begins – the era of coupon aggregators.

Social Buying websites, also known as Group Buying, Coupon Buying or Daily Deal aggregators / websites have been around for a few years. Groupon, which originated in the U.S., has since managed to go public and raise millions of dollars – proving to be a highly profitable venture.

The basic method behind these websites is that they offer high quantity sales in return for steep price reductions. By promising increased sales, merchants lower their products prices, thus making the product more appealing to online buyers. The websites profit by percentage from each product sold via their website.

Today there are around 500 daily deal aggregators worldwide, if not more. Following this trend, numerous aggregator websites have been popping up over the last few months in South Africa.

Many have questioned the sustainability of these websites – most claiming that the method itself is flawed and that the expected lifespan of such websites is limited. Unless something radical changes, most will agree that this method will not last forever. So the question remaining is what changes can be expected in this market, if any? 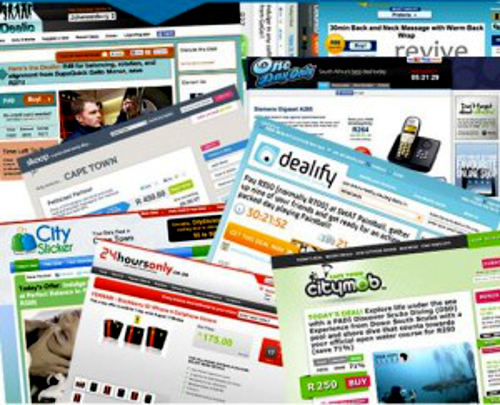 According to David.B – CEO of Dealafrica – one of South Africa’s more popular Daily Deal Aggregators, one such change has already begun. According to him, thousands of South African Internet users who used to subscribe to one or two coupon websites are now subscribing directly to the daily deal aggregators themselves.

These websites do not sell products directly but rather collect the deals being offered on many various daily deal aggregators and centralise them in one place. This arguably saves users the time and effort that would have been spent searching for deals on separate websites.

An additional advantage is the various filtering options aggregator websites offer, which allow users to only view the deals that interest them and opt to receive emails according to their predefined preferences.

Techcrunch, Computerworld, Cnbc.com, and cnet.com have already begun reviewing the subject claiming that the move from coupon websites to daily deal aggregators was expected.

“People are constantly looking for faster and more convenient ways to get things done and daily deal aggregators are definitely one of those ways”, one reporter claimed.

For a trend to succeed there has to be a financial motive for the people making it possible. Its value has already been picked up on by major online players. Google and Facebook are showing increased interest and Google made the first move by buying out the deal aggregator website The Dealmap.

A quick peruse through the Dealafrica website reveals it clean and elegant layout. It is very easy to navigate and they are very quick to respond to any queries. What makes Dealafrica shine is its efficiency, convenience and the ability to filter through various daily deals.