What do you Wannado when you grow up?

WANNADO: Amusement park where kids do what they wannado

WHEN I was growing up as a child the dream place to go was Disneyland. People dressed like Goofy, candy floss, and a few amusement park rides seemed to cut it as the height of entertainment. But that was back then.

The youth of today will be nagging their parents to take them to a Wannado City – an indoor role-playing theme park. The first of its kind, Wannado occupies 140 000 square-feet of South Florida’s largest mall and sees more than 26 million visitors a year.

It’s been said that Wannado has redefined child entertainment by simulating a dream world where children are encouraged to take on and experience one or several adult professions. It features 60 Real-play venues and over 120 career possibilities – ranging from archaeologists, doctors, attorneys and TV hosts to fashion models, pizza makers, DJs and clowns.

The venues and professions are designed to allow kids to live out their dreams while simultaneously empowering them to become decision-makers and learn responsibility. It is the ultimate childhood experience which has been framed around the difficult question of: “What do you wanna do when you grow up?” 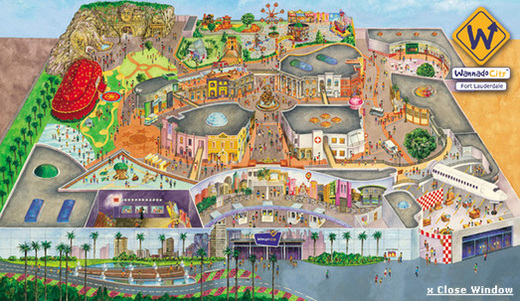 At Wannado City, kids can do what they wanna do!

“At Wannado City, kids can do what they wanna do”

The chief creative officer of Wannado City – Luis Javier Laresgoiti, came up with the idea while watching his daughter “play executive” on his business phone. Wannado is now a fully capitalised venture backed by multinational entertainment corporation and is led by an experienced team of entertainment executives from corporations such as Paramount Parks, Nickelodeon, Time Warner and Disney.

Such corporate backing brings me back to the reality that we live in a vicious, expanding capitalist society. When my peers and I were younger we only had to start worrying about what jobs we might do in our latter high school years. A Wannado City, on the other hand, almost seems like a cleverly fun way of instilling a capitalist ideology into the naive minds of children, with the hidden agenda of: “Get them while they’re young!”

The project is aimed at the 2-14 year-old set and will cost you or your child within that age range $30 (roughly R210) to get in. Kids aged over 15 are charged half-price and those under 2 get in for free.

Wannado City caters for schools, corporate organisations, and even faith-based groups. If you have a birthday party coming up, book now – they cater for those too.

Additional Wannado City locations are currently being developed throughout the United States. I just wonder whether South Africa will have anything remotely similar by the time I have kids. Otherwise they’re just going to have to aspire to be a journalist like their dad. Sorry kids!

For more info check out: