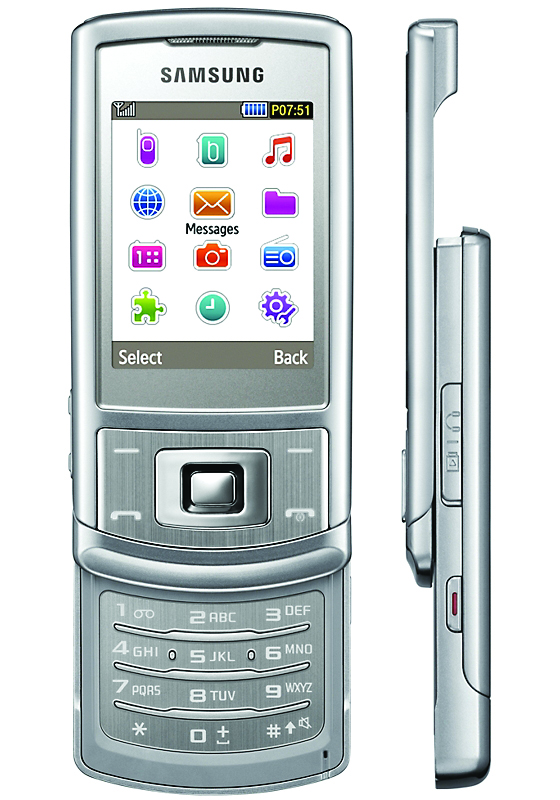 There was my first phone that drowned in a fishpond, another that committed suicide by jumping out of a six-storey window, a third phone that died in a freak electrical-induced accident, and a few others that were simply tossed aside because something sexier and more exciting had come to town.

But of all the phones I’ve had in my life, they’ve all had one thing in common — they all belonged to the same brand. My current phone is the same brand. I believe this is because of a fundamentally human thing — that we tend to resist change, especially in the technology department. There is something comforting about the familiar and we don’t want to have to faff about learning something new when we already have something old that works perfectly fine.

This brings me to the Samsung S3500, which was a pleasant introduction to Samsung mobile phones. This model seems to be marketed as a fairly up-to-date budget phone, because apparently we’re in some kind of merciless economic recession. It’s not a bad marketing strategy, although I would argue that what actually appeals to consumers the most is the idea of paying less for more.

It has one unique function called “fake call” which is a little strange. This function enables you to activate a bogus incoming call so you can free yourself from awkward conversations or dodgy situations by pretending to take a call.

It has EDGE connectivity capabilities, an embedded music player, FM radio, Bluetooth, a WAP browser and a camera, among other things. It also looks really slick and there is something very pleasing about a slider phone.

Let’s take a closer look (a full list of specs appear at the end of this post):

DISPLAY
The Samsung’s display, on the other hand, is great, with each of the main keys of the D-pad bringing up a different set of options. It is easy to navigate and all the functions are neatly displayed on the main menu. It has a nice selection of themes, the icons are large and the screen is bright. Top marks for presentation.

SOUND
One thing that cellphones today are really starting to perfect is the way they sound. Gone are the days of fake-sounding, mosquito-like noises emanating from phones as they ring. Most mobiles today sound so good that they make for great portable radios and MP3 players. The Samsung S3500 is both and they sound great.

KEYPAD
Until this year I had always been reluctant to get a phone on contract. The thought that yet another phone might drown or kill itself, leaving me with the responsibility of having to pay for it every month for two years, doesn’t really appeal to me.

However, one needs to consider that as long as you take good, vigilant care of your cellphone, having one on contract should be a lot cheaper in the long run. I am finally content with my current phone with the exception of its keypad, which is very similar to that of the Samsung S3500.

I find these newer, flat and hard keypads difficult to operate, especially when trying to type an SMS in a hurry. This does not bode well for someone who SMSes more than he/she phones.

My fondest memory of my very first phone was its spongy buttons, which almost massaged one’s fingers. With these flatter, more plastic-like keypads, such as that of the Samsung S3500, I find that I have to use my fingernail to type … if it hasn’t yet been chewed off from frustration.

GAMES
The Samsung S3500 has a large library of games, which tells me that this phone is really suited for the teenage market. The phone comes with seven free games with the option of downloading more. And these are not the standard, outdated games such as Snake, but classier, more challenging digitalised treats such as Harry Potter, Midnight Pool and Sudoku.

If mobile games are your thing, these should keep you entertained for hours.

INTERNET
As soon as I read “Quad-band” on the side of the Samsung S3500’s box I got rather excited as I expected to experience lightning-fast Internet speeds. However, if you have experienced ADSL Internet speeds, then connecting to the web using this phone (or most phones for that matter) is nothing special and can be painfully slow. To make matters worse, this particular model doesn’t have 3G capabilities, which can be a bummer.

CAMERA
Considering that most modern phones today have five-megapixel cameras, the Samsung S3500’s two- mega pixel camera is a bit of a disappointment. It’s fine for taking photos (and even video) to view on the phone itself, but if you are wanting to preserve your mobile memories by printing out your pictures from your phone, this one really isn’t quite up to the task.

OTHER FEATURES
With the exception of 3G and GPS, there seems to be very little that the Samsung S3500 is missing when compared to other cellphones of 2009. It has a standard phonebook and messaging interface, the usual call log, a separate folder for all your downloaded or produced content, an organiser with a clock, alarm, calendar, calculator and converter, a voice recorder, timer, stopwatch and numbered buttons from one to nine.

FAKE CALL
There is, however, one unique function called “fake call”, which is a little strange. Many of Samsung’s more recent handsets include this feature, which enables you to activate a bogus incoming call, so you can free yourself from awkward conversations or dodgy situations by pretending to take a call.

For added authenticity, you can record your own fake voice “call” that plays back when you answer. Potentially useful perhaps, but don’t be caught using it!

Apart from that, the Samsung S3500 is nothing too special but is a decent upgrade if you currently have on older Samsung model. I think I’ll stick to my particular cellphone brand for now and simply avoid getting too close to fishponds, hanging around high-rise windows, and make an extra effort to stay away from electrical experiments.