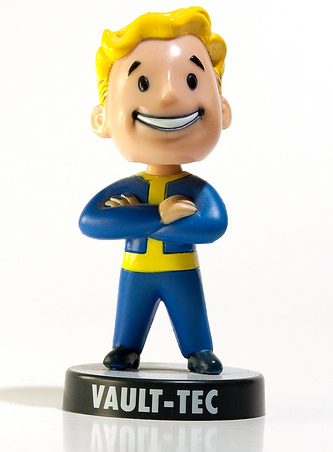 The Agility Bobblehead is found Near Chance’s Grave – near a Fiend camp where Chance slaughtered them all. In the center of the camp is a log where you’ll find this bobblehead resting.

The Barter Bobblehead can be found southwest of Bitter Springs in Cap Counterfeiting Shack. The Bobblehead is on a workbench in the basement.

The Charisma Bobblehead is inside the Gomorrah Suites building – in a large room with two circular beds. The bobblehead is on a shelf near the red bed.

In Quarry Junction is a cave near a Deathclaw mother and her demonspawn. The Endurance Bobblehead is being grasped by a skeleton at the back of the cave.

The Brotherhood of Steel are holed up in a place called Hidden Valley, which is near the NCR Correctional Facility. You have to complete a few quests to gain access inside. Once you’re done, the Energy Weapons Bobblehead is under some stairs at the back of the fortress.

Look in the first aircraft hangar at Nellis Air Force Base. The Explosives Bobblehead is on a shelf at the back of the hangar.

Inside Vault 34. At the very last floor, at the very bottom is the Armory. The Guns Bobblehead is lying on a table next to a missile launcher and some armor.

The Intelligence Bobblehead is inside a building called Allied Technologies near downtown New Vegas. Take the first door on the right after entering the Interior Offices and you’ll find it on a desk along with tons of Sunset Sarsparilla Star caps and bottles in the corner. Score.

The Lockpick Bobblehead is inside the NCR Correctional Facility – Prison Block B. It’s underneath a rusted bunk bed at the back of the cell. Lock-picking is essential for playing Fallout New Vegas in hardcore mode.

Where else but the Lucky 38 Casino! Check the check-in counter for the Luck Bobblehead.

Luck of the Irish!

The Medicine Bobblehead can be found right at the start of the game, inside Doc Mitchell’s house. It’s on his desk next to where you (probably) swiped his glasses and magazine.

Near Legate Lanius’ Camp is an area with a bunch of training dummies and what looks like a weapon forging area. The Melee Bobblehead is sitting on a table next to a grinder, Anvil and a stack of machetes.

The Perception Bobblehead resides at a place called “Sniper’s Nest” – west of Cottonwood Cove. The bobblehead is sitting on a shelf next to a bed.

In the New Vegas Strip is a building called Michael Angelo’s Workshop. The Repair Bobblehead is sitting on a bench next to a blueprint for a billboard.

Need a hand with that?

The Science Bobblehead is in a place called Fortification Hill Weather Station, located near The Fort. There are some panels on the floor that lead to a secret basement, which in turn leads to a massive Securitron Vault. The bobblehead is near the back of this vault on a desk with a broken radio and toolbox.

Inside the Hoover Dam Power Plant is a bunch of wooden crates (one of which contains a suit of Chinese Stealth Armor). The Sneak Bobblehead is hidden behind the top crate on the right.

Nipton Town Hall is where you want to look. The Speech Bobblehead is on a table at the back of the room on the left side.

The Survival Bobblehead can be found on Scavenger Platform, which is right in the middle of Lake Mead. You’ll have to swim to get across. The bobblehead is sitting on top of a footlocker.

Another bobblehead coveted by the Lucky 38 Casino! The Unarmed Bobblehead is in the VIP Lounge – right in front of a golden pair of boxing gloves.